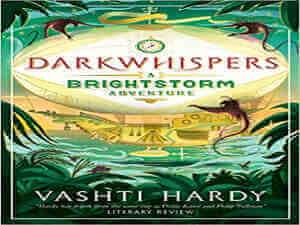 Barely back from their previous perilous sky-ship adventure, twins Maudie and Arthur Brightstorm are off again and there is another mystery to solve. Harriet Culpepper and her crew are planning a trip East to search for missing explorer, Ermitage Wrigglesworth. However, before they leave, the twins witness one of Eudora Vane’s closest associates steal something from Wrigglesworth’s house: suddenly, Eudora is making her own plans to search the Eastern Isles. She organises and leads an entire explorer fleet to search for Wrigglesworth, sending Harriet’s crew to the most remote island. What will they find when they get there? And what is Eudora really up to?

I loved Brightstorm and have been waiting for a sequel for what seems like forever. I was, therefore, delighted to finally get my hands on a copy of the second Brightstorm adventure – Darkwhisperers. All my favourite characters are back. I was thrilled to be reunited with the Brightstorm twins, Maudie and Arthur, along with their sky-ship captain Harriet Culpepper and her trusty second in command Welby. Most of all, I was glad to once again spend time with the sky-ship’s cook Felicity. With her lucky spoon and tingling toes, Felicity remains my favourite character but I have to admit that, by the end, she had some very stiff competition from Welby.

Eudora Vane continues to be as truly evil as she appeared in the first adventure. Indeed, the premise of this story (which focuses on her determination to expose and exploit a near perfect land) only intensifies the reader’s dislike. While the Brightstorm twins question the punishment she is given I, for one, was fully in favour (and more than a little fearful that Eudora might find a way to evade it!) Sorry, you will have to read the book to discover both the proposed punishment and what happens: to say more has the potential to spoil the story.

While I was thrilled to be reunited with all these characters, it was the setting that made this book really special. In the first book we entered a magical frozen land – the unexplored South Polaris. In the sequel, the Brightstorm twins find themselves going to the exact opposite – a land that is so remote, so well protected, that most people don’t believe it exists. In contrast to the freezing ice and snowstorms of South Polaris, in Erythea we have tropical storms and sweltering rainforests. The ecology-tech is particularly intriguing and Erythea is most definitely a place I could’ve spent a lot longer exploring.

The first book also introduced us to some amazing creatures including the ‘thought wolves’ and their leader, Tuyok. In book two, author Vashti Hardy brings us a new collection of equally wonderful Pullman-esq creatures. This includes the ‘darkwhisperers’ of the title but also the truly wonderful water-bears. Indeed, I challenge anyone not to fall in love with the water-bear Maudie names Valiant and I suspect that many readers will, like me, be delighted at the suggestion that he might have at least a small role in a third Brightstorm adventure.

If you picked up Darkwhisperers, I’m assuming you’ve already read Brightstorm by Vashti Hardy. If not, go and grab yourself a copy straightway! If you’re looking for something different, why not try The Polar Bear Explorers’ Club by Alex Bell or, Nevermoor: The Trials of Morrigan Crow by Jessica Townsend.