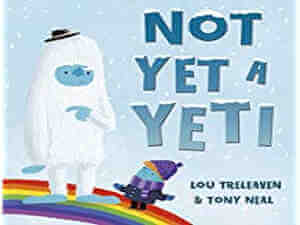 A truly delightful story that brings an original and unexpected twist to the traditional tale of the importance of accepting yourself.

George’s grandad is a yeti. His mum, dad and big sister are also yetis. George, however, is not yet a yeti. To become a yeti, George needs to learn to enjoy luring hikers to their doom or chasing people round the mountain until they scream in terror. But George doesn’t want to do any of these things. When he thinks about what he wants, George discovers he wants to be something entirely different. Just accepting this allows him to turn into what he really wants to be – something kind, sparkly and magical (but you’ll have to read the book to find out what!)

This is a truly delightful story that brings an original and unexpected twist to the traditional tale of the importance of accepting yourself. I wasn’t surprised that George doesn’t want to be a yeti. And I fully expected him to learn that he didn’t need to act like the other yetis. However, I wasn’t expecting him to transform into an entirely different mythical creature. The revelation is wonderful and I just loved the fact that his family embrace this new version of George. Better still, Dad suggests a plan that will work for everyone. (There’s a danger that the hikers might become extinct if the yetis keep eating them so Dad suggests they just terrorise and chase the poor people and give George the opportunity to rescue them).

While I thoroughly enjoyed the story, I was equally impressed by the fact it is told in so few words. The language will be easily accessible to young children and they are likely to enjoy the repetition of George’s questions. As an adult reader, I particularly liked the mirroring of the opening in the ending and the skilful characterisation of the various members of George’s family.

The text requires a lot of pictures of yetis, especially in the opening pages as we meet George’s Grandad, Mum, Dad and big sister. There was, therefore, a risk that the pictures would lack variety and pace. Fortunately, illustrator Tony Neal, successfully manages to create unique characters in the family of yetis through use of a few carefully chosen (albeit necessarily stereotypical) props. He also finds numerous different ways to show us life as a yeti. My favourite is a close of up of Dad peering over the top of a mountain with the hikers running away as fast as they can: if you look in the bottom right that’s a sneaky picture of George holding a sign that says: ‘Escape this Way.’

The sharp, colourful and stylised illustrations really come into their own, however, when we move on to George’s transformation. Suddenly the pages are full of rainbows, hearts, balloons and musical notes alongside a beaming George. Beautiful is the only way to describe it!

If you enjoyed this, why not try another wonderful picture book on a similar theme in Odd Dog Out by Rob Biddulph.