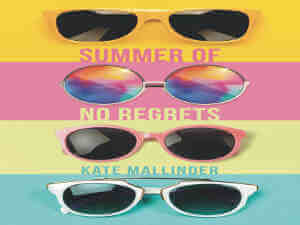 Uplifting, heart-wrenching and totally addictive, this is the must-read teen book of 2019.

Four friends, one summer. They’ve been making plans all year but these quickly crumble when Sasha announces that she’s been invited to spend the summer with her dad in Geneva. Part of her wants to stay with her friends but she knows she’ll regret it if she lets the opportunity pass. The other girls agree she must go and make a pact – to seize every opportunity no matter how scary. They’re each going to live a summer of no regrets. This inevitably leads them in different directions: Sasha leaves for Geneva; Hetal plucks up the courage to take up her place at an exclusive science camp for high achievers; Cam goes in search of her biological father; while Nell applies for her dream job. Life, however, has a habit of throwing a curve ball when you least expect it and they end up reunited rather sooner than they expected.

The accepted wisdom in books on creative writing is that it is risky to write alternating first-person voices. This is because the reader often finds it hard to distinguish which character viewpoint they are in (especially if, like me, they fail to always read the names in the chapter headings). There’s also a risk that the reader will like one character more than another and will, therefore, become dissatisfied with half the book. Fortunately, no-one told debut author, Kate Mallinder, of this widespread advice. Summer of No Regrets doesn’t just break this writing rule – it smashes it into a thousand pieces, introducing us to FOUR voices in strict rotation. This, however, works brilliantly as every voice is totally distinctive and there isn’t a single moment’s confusion.

In fact, the structure of the book actually adds to the tension. For example, mid-way through the story, one of Nell’s chapters ends at a totally nail-biting moment and the book becomes impossible to put down as you have to read another three chapters before you can find out what happens. (Sadly, I reached this moment a few minutes before I was due to go out which meant I was left texting my friend to explain I had been unavoidably delayed. Luckily said friend doesn’t read my reviews!)

Saying this, the book was pretty difficult to put down from the outset. (I took to rewarding myself with a chapter every time I completed a task on my to-do list). Each character is perfectly crafted and feels entirely genuine. While my teenage years are a very long time-ago, I found myself closely identifying with one particular character and could see so many of my friends in the others.

A character-driven story, the plot is relatively quiet (at least in the first half) and those who read my reviews will know I usually prefer action-packed storylines. This story, however, breaks this mould. I found it totally addictive whilst being simultaneously uplifting and heart-wrenching. In keeping with the emerging ‘up-lit’ phenomenon the ending is a happy one – so why, I wonder, did I have tears in my eyes for the fourth time when reading this book!

This is a story of longstanding friendship and I’m confident that a whole cohort of teen readers will forge a strong bond with these characters. I suspect that, like me, their only regret will be that the story is over to fast. I’m missing these girls already and I’m really hoping Sasha, Hetal, Cam or Nell appear in another book in the not too distant future.

If you enjoyed this, you might want to consider reading the Waiting for Callback series by Perdita and Honour Cargill. This starts with Casting Queen. Alternatively, for another feel-good teen read, why not try Oh My Gods by Alexandra Sheppard.